After an awesome performance by Combat Corner athlete Jordan Griffin at UFC Fight Night 169 winning himself a performance of the night bonus, we of course had to sit him down and talk about the fight and whats to come in the future.

Nick: We're here with Jordan. Griffin. Jordan is a featherweight in the UFC and fought this last weekend at UFC Fight Night 169 against TJ Brown with that submission victory. He was able to win a performance of the night award making him 50k richer. We're going to start off with, How are you doing today after letting the weekend settle in?

Jordan Griffin: Man, you know what? I don't feel any different. I feel, I feel very grateful and I don't want anything to change uh my coaches even said you know just "you have your jobs back home just get back to work." You know, "this is your break, you get a chance to get ahead and I'm just going to get back to the Grind". So I feel great.

Nick: Just a second ago you were telling me that after this you're actually heading back to your regular job, you're not taking any breaks off you're going straight back in?

Jordan Griffin: Yeah, I have some people that want to come in that want to get activations done at T-Mobile today. So I hit my manager Carlos up and asked, "Hey can I pop in for a second and get this done. He's like "of course", he's like "you're not going to take a break?" I'm like "Nah man I've got this money. I got to make this money".

Nick: So now that the hard part's over. Is there anything that you have planned for the future?

Jordan Griffin: You know, I've been talking about making that move to 155lbs, but after this last weight cut which went like really, well, obviously, I'm going to be sticking around the 145 Division but if I can tiptoe my way into into 55 division with the right matchup. I'd like to do that and then just continue to train continue to get better and there's some things I want to work on. So I'm excited.

Nick: Coming into this fight was there there anything on your mind mentally or anything that you were over thinking?

Jordan Griffin: That was my problem I was overthinking before I was thinking too much and I was trying to be perfect and I think I really went back to my roots man. I just went out there. I put the mean face on I stared him down from across the cage and I didn't take my eyes off my opponent. And yeah, I just got the win. All I want to do is finish, every single fight I want to finish.

Nick: Now going to what you were just talking about going back to your roots. Can you explain that a little bit?

Jordan Griffin: Uh just that mentality man. That mean  dude, when I fight its either me or you, I'm fighting for my food here. You know, I mean, I'm fighting for my life and that last weekend in Norfolk at UFC Norfolk I was fighting for my job. So, you know to be able to secure my job, to be able to get the $50,000 bonus to be able to be progress man this is huge for me. I just got to spend this money the right way, take care of myself, healthy, be healthy, mentally and physically and go get my son. Take care of my son, and I'm happy man. All this means is more time with my family and more time in the gym. So it just means I can spend more time with people that I love.

Nick: So talking about your family and how you're fighting for your job. I saw that you you wrote a check to yourself on February 1st? 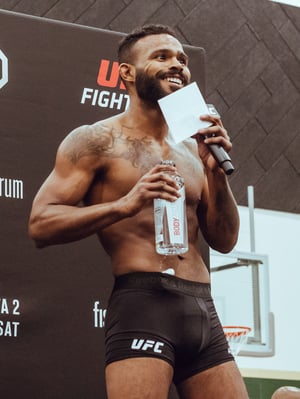 Jordan Griffin: Yeah, I wrote a check man. I've been doing this since 2011 and I've had a lot of ups and downs man. I'm so happy to be here. I was one and three. I'm so grateful to be here and I was grateful Dana White gave me the opportunity to be in the UFC. First I said I was going to get back to to my old mentality. I was just like that mean dude, they said my name is in there screaming, like dude I was pumped. So I wrote the check and I actually forgot that I wrote the check. I put in my wallet and it says "the checks written for getting your son and the right to be a father, buying your first home and for never giving up and yeah dude. I never gave up never doubted myself, and I'm happy to be here.

Nick: So do you feel you made the right adjustments coming into this fight against TJ Brown?

Jordan Griffin: I did everything right? I mean, I've just really accepted who I am in like MMA in the end. I think it's continuously changing. I was the ground and pound guy when I first started out and then people say "oh your a striker" they were saying I'm a "submission specialist" and Professor Wanderley was like "Hey Man, how many knockouts you have?" and I was like "5" and he's like "How many submissions you got now, 9? Your a submission artist now". So yeah just constantly evolving and trying to get better.

Nick: Was there anything in the fight that maybe in the future you feel that you're going to have to work on?

Jordan Griffin: Just my my entrance coming in and closing that distance and maintaining that close distance. I tend to pop in boom, boom, boom. I slipped back out. You know it works, but I think for me where I want my game to go I want to get in I want to stay in. I want that inside dirty boxing. I want those trips. I want those elbows. I like the clinch and then you know I always just stay off the ground. But it was cool to see like he got me on the ground. I kept getting back up right away. So if it's cool, you know, I spent you know damn near, you know, I spent a good amount like six months working with Raufeon Stots. He's a two-time NCAA wrestling champion. He's over at Bellator, but I spent you know, a lot of time with him and working with one of his students Aiden who also wrestles and then competed so to spend a lot of time with them and it paid off, you know, I got off the ground I was able to transition and get into other things, I was able to progress the fight instead of staying planted on the ground.

Nick: So so speaking of the fight a little bit. Can you give us a walkthrough on on the fight? And where you feel that you started to take over and to make it your your fight?

Jordan Griffin: I just noticed he was constantly going for the head. He kept shooting in for the double leg andhis thing is he just goes. If you look at his past record, he just goes so hard that first round. Going into that second round they were like, "he's gassed, he's tired" and I was just like Okay cool. So we went back out there. It was the same thing he kept going for the single leg and he kept giving me his neck deep. I mean I had his neck deep every single time he shot into my legs. So I was almost at a point where I was just welcoming him in there and it was good. But all I could think is like if I can't finish him it's done. Like I need to finish this dude. I need to put him out. So when I had it in there real deep-like that and I held I actually stop squeezing and I just held it there and I was waiting for the judge to just like. Like, you know, I'm done. I'm not letting go until you tell me so I plopped him over, I didn't even know he was out like that. I thought he was just you know kind of out but he was gone man.

Nick: Were you able to to watch your fight replays and the commentators talking about how it was an unusual position for someone to take and get a victory like that? What are your thoughts on that?

Jordan Griffin: Yeah I feel like im just going to continue working on my jiu jitsu and uh working with Raufeon Stots, working with professor Daniel Wanderley and working on my striking and I feel like those submissions are what's going to make me stand out in the division pretty much if you look at any of my other fights. I've had crazy submissions like that too. And I feel like now that I'm in the UFC if I can bring those other submissions. I have a bunch of tricks, you know, and if I can just show showcase those on the big show, man I'm going to be making that paper.

Jordan Griffin: Uh no not yet. I mean, it's nice you know. I just need to build my way back up. So I mean I got this win I'd like to go on a steady win streak, um just build myself up and then you know whoever they offer every person the UFC's hard. So whoever they give me. I'm just going to watch the video. We're going to talk about it with the coaches and then I'm just going to prepare for that person and a get a couple wins and then we can start talking about top 10 the world and stuff like that. So hopefully I can get at least two more fights in this year. I got an earlier fight in you know, it's March, you know what I mean? So if I can get two more fights in in 2020 or 3 that be crazy I be happy with that. But you know, I just I'm always going for the finish. I don't want any of those decisions.

Nick: All right, big banks of Jordan Griffin for coming in and sitting down with us and going over his  fantastic victory over the weekend. Be sure to keep your eyes peeled for upcoming sponsored athlete fight news and videos. Also make sure to follow us on all of her social media accounts linked below: